Why Bench Press and Bicep Curls are good for BJJ.

There are many awesome exercises that can benefit your grappling and BJJ, a lot of people will say Kettlebells are great, some people swear by Olympic lifts, whereas others love battle ropes and sandbags.

However, when it comes to supposed ‘bodybuilding’ style movements there is usually a lot of criticism about their viability and usefulness for grappling athletes. Out of all of these I think the Bench Press and the Bicep Curl get the worst press.

I remember being at an open mat and hearing a guy talking about some of the lifters at a gym opposite saying “I’d like to see them try and Bench Press out of an RNC” to which he received a lot of positive reinforcement. I always wondered if someone in the bodybuilding gym was looking over saying “I’d like to see those guys RNC their way out from under this 500lbs Squat…” probably not.

But those exercises aren’t “functional” – First of all I hate that term; functional for what exactly? If you’re the guy dropping that piece of ‘knowledge’ I gamble you recommend punching with dumbbells to increase punching power whilst standing 1 legged on a BOSU. Lol.

Anyway, I am here to tell you that the Bench Press and Bicep Curl are awesome for BJJ!

Now bear with me here, I’m not saying they are the best or most optimal exercise but they are both relevant and helpful to grappling performance. Let me walk you through my rationale.

Bench Press is a staple of powerlifting and to be honest pretty much most people’s gym routines. It is a horizontal pressing movement performed in the transverse plain.

The Bench Press is a compound movement utilising multiple muscles and joint actions to achieve the lift.

The Pectoralis Major is the primary muscle used in the Bench Press. Both the Sternal and Clavicular heads of the ‘Pec Major’ transversely flex the shoulders during the bench press.

The Anterior Deltoid is a synergist and assists in transverse flexion as well as flexion of the shoulders during the movement.

The Triceps are used to extend the elbow during the Bench Press. They are especially important in ‘locking out’ the bench press at the top of the movement.

These constitute the main muscles worked in the Bench Press, however, when getting into ‘optimal’ bench pressing position the lifter will utilize recruitment from the lower body and back to make the lift as strong as possible. 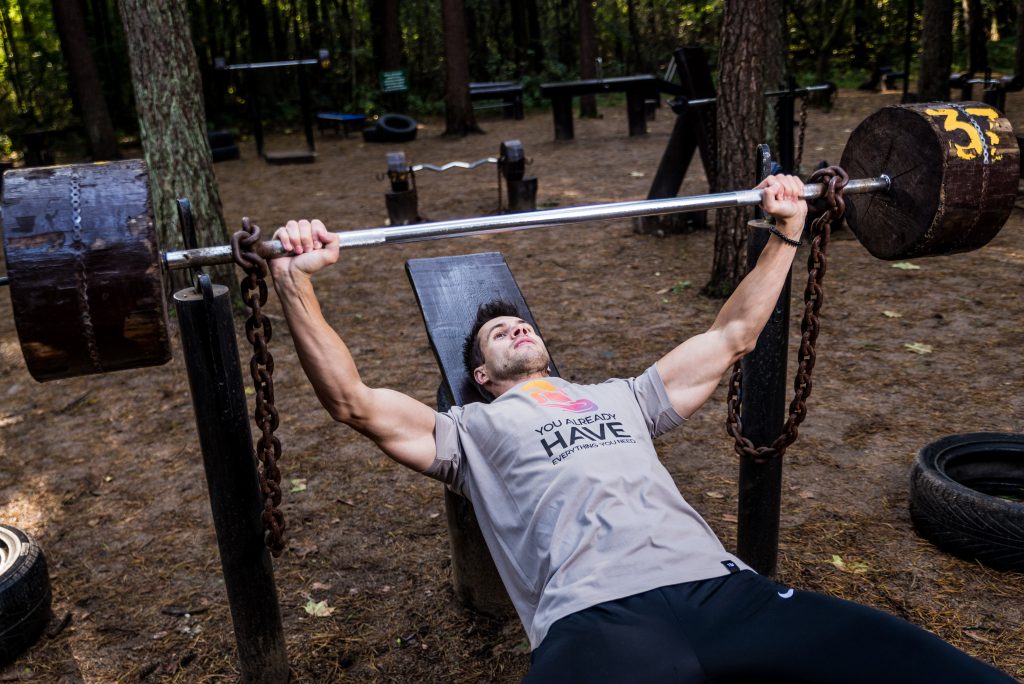 How does this apply to grappling?

Well when we are underneath our opponent it is common to use framing to keep their pressure off of us as well as negatively impact their forward progression. Now, of course we want to be achieving this mechanically, through superior technique – but this is not always possible, and then having the strength to reset frames and posts under a heavy top pressure is essential. When we are grappling we use a lot of isometric strength to resist our opponent and often this will be in the transverse plane – perfectly trained by Bench Press.

Now I know you’re not lying on a bench, I know your partner is not a bar, I know they have uneven weight distribution and a brain (most of the time) – however, strength is a transferable skill. If you have spent time in a Bench Press position you will have practiced the skill of generating force whilst lying on your back, you will have the ability to recruit your pecs, shoulders and triceps to exert horizontal pushing pressure. This may be the difference in your ability to create space to re-guard, push an opponent away or resist a pass.

Imagine you are under side control, you have frames but your opponent has heavy top pressure, you want to hip escape and/or bring your knee in to assist a re-guard. If you have good strength you may just be able to move that weight up fractionally to make that move possible.

“Ah but I would do it with technique”

Cool. So would I, however there is no question that re-enforcing technique with more strength and power is only a good thing.

If you want a bigger, stronger and more powerful upper body then the Bench Press should absolutely be a staple of your training.

Perhaps the most loved exercise amongst ‘gym bros’ and the most hated amongst ‘serious athletes’ – the humble Bicep Curl.

The Bicep Curl is a single joint action exercise unlike the Bench press and utilizes flexion at the elbow to contract the bicep, shortening the muscle. Although an isolation movement, other muscles do act as synergists, such as muscles in the upper back as well as brachialis and brachioradialis.

How does this apply to grappling?

Where do I even start, well let’s ask this question do you want stronger or weaker arms when grappling? That in itself should answer the question, but lets take it further. Almost all pulling movements utilize the back and biceps to achieve their desired outcome: do you ever pull anything in BJJ?

We are constantly pulling in grappling, be it snapping an opponent down, using a sleeve or collar to break balance, breaking posture in a triangle, defending an armbar or squeezing a guillotine. Yes, all of these use technique. Yes, the technique is the most important bit but once again would you prefer to be applying these techniques with more or less strength?

I am sure some of you have rolled with that big guy, the ‘meathead’ who just grabbed you in a front headlock and squeezed. You tapped, but ‘it was more of a crank’, yup, but you did tap right?

Now imagine ‘meathead’ got taught perfect guillotine technique and he applied it with that crazy squeeze – now we have a scary prospect.

I think the Bicep is essential to train for grappling, and is employed numerous times in a plethora of positions both offensively and defensively. Not only this but it is vital in developing ‘squeeze’, which we all know is an exceptionally important trait for finishing submissions including Strangles and Chokes as well as a number of joint locks.

Now I am not saying these are magical exercises, but it’s hard to argue that improved confidence isn’t an amazing trait for any competitor.

Get Benching and Get Curling!! But seriously, before you just follow the herd or agree with the senior belt, ask yourself why? That’s all – why? Why isn’t this good or useful – if you can’t come to a logical conclusion then do some research you might be surprised and gain the competitive edge over your training partners. Remember ‘functional’ isn’t a specific thing – what is functional for one sport might not be for another, just because something looks cool or crazy (think elevation masks) doesn’t make it ‘functional’.

That being said something that is ‘functional’ for all sports and life in general is being STRONG.